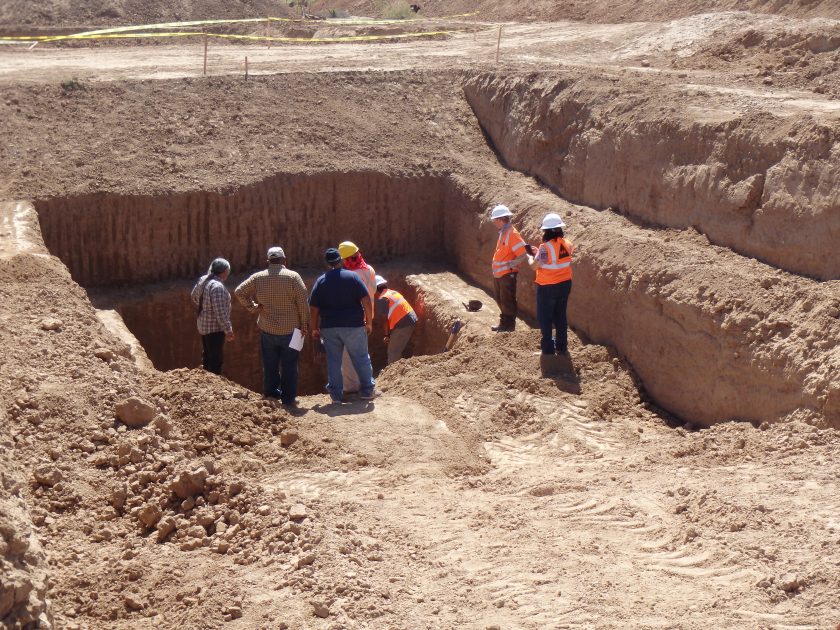 The Town of Queen Creek requested Logan Simpson complete Phase II archaeological data recovery at site AZ U:14:49 (ASM), a prehistoric Hohokam village site also known as Los Pozos de Sonoqui, which had been determined eligible for listing in the National Register of Historic Places prior to planned construction of the Sonoqui Wash Channelization Project. The overall project’s goal was to develop and implement a plan for channelization of segments of Sonoqui Wash to improve regional flood control. The Phase II project area encompassed approximately 24 acres.

During the planning stage of the data recovery project, Logan Simpson recommended that the Town consult with affiliated Native American tribes as our staff knew that this site was important to tribal communities. The Town agreed to consult with the tribes, and Logan Simpson included specific questions within the project’s research design in the Historic Properties Treatment Plan (HPTP) that addressed Native American perspectives on water and water management especially given that it was known that a large prehistoric reservoir was present in the project area. In their review of the HPTP, the Gila River Indian Community, Tribal Historic Preservation Office highlighted and praised Logan Simpson’s proposed plan to coordinate tribal outreach with O’odham tribal representatives and elders to obtain O’odham perspectives about the project’s archaeological findings and results.

Prior to conducting fieldwork, crew members received cultural sensitivity training through the Salt River Pima-Maricopa Indian Community to ensure that all crew members understood tribal importance of the resources they would be working to excavate. The excavations resulted in the identification and documentation of 112 features associated with the prehistoric period. One of those features was a massive, centrally located retention basin with an estimated storage capacity of 1,200 cubic meters (317,000 gallons). The reservoir is one of the largest prehistoric reservoirs documented in Arizona. It is an oval-shaped reservoir that measures approximately 38 m by 25 m with a maximum depth of approximately 7.5 m. The reservoir is associated with the late Classic Period portion of Hohokam settlement (A.D. 1375-1450) and demonstrates the inhabitants’ ability to create accessible local water sources by diverting and harvesting runoff into artificial or natural basins. The reservoir underscores the site inhabitants’ ability to successfully harvest rainfall for year-round domestic use. It operated for no more than 50 –60 years and could have supplied domestic water for up to 530 people annually.

The ethnographic study of contemporary O’odham groups’ traditional water storage technologies, cultural views of water, technical aspects of water harvesting and storage, and related issues in the southern Arizona desert complemented the archaeological work. Logan Simpson engaged Dr. J. Andrew Darling to lead the study, and he interviewed tribal leaders and elders from the Tohono O’odham Nation and the Gila River Indian Community. Furthermore, he brought these tribal members to the excavation site to see the features unearthed by Logan Simpson’s archaeologists.

This research on O’odham creation stories and water use has elevated archaeologists’ understanding of the persistent connections of affiliated O’odham tribes with the Sonoqui Wash Site and the Queen Creek region. Ethnographic research has also demonstrated the extent, variety, and agricultural flexibility of O’odham communities in the Queen Creek watershed. It contributes to archaeologists’ understanding of the Queen Creek delta as a series of vooshan, shallow alluviated drainages that annually wash over their banks during the summer monsoon, creating broad well-watered areas suitable for farming and water storage. Many vooshan are visible on the Tohono O’Odham reservation today, where fields and villages have been abandoned since the 1950s or earlier.