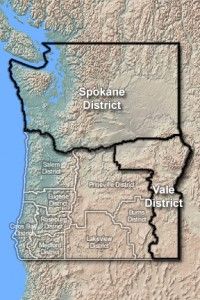 Logan Simpson has been awarded a five-year IDIQ with the Vale and Spokane districts of the BLM to provide cultural resources inventory and evaluation in eastern Oregon and eastern Washington.

Historic archaeology sites in the Vale and Spokane districts include rockshelters, quarries, campsites, village sites, and rock art sites. Historic sites and structures on public lands in both states include ranches and railroad logging camps, Civilian Conservation Corps sites, and roads and trails.

The Vale District manages 5.1 million acres of public land in eastern Oregon. The district boundary runs along the Snake River between Oregon and Idaho and includes small sections of Washington and Nevada. The majority of BLM public lands in Washington are east of the Cascade crest in the central Columbia Basin and in the highlands of northeastern Washington along the Canadian border.

According to the BLM, more than 1.2 million acres of public lands in Oregon and Washington have been inventoried for cultural resources.