Cultural resources research on the archaeology of Central Arizona has focused mainly on the large settlements within Perry Mesa. Perry Mesa is a series of basalt-capped mesas and canyons along the Agua Fria River that resulted from the eruption of the shield volcano. This mesa-canyon complex covers an area of about 75 square miles and contains one of the most fascinating groups of ruins in Central Arizona.

Beginning in 2006, as part of Logan Simpson-supported independent research, one of our senior archaeologists supervised a multiyear project of a previously unstudied prehistoric community that is undoubtedly part of the Perry Mesa system, which is located 10 miles east of Perry Mesa proper. Over this seven year period, a group of more than 20 volunteers, many of them Logan Simpson employees, surveyed and recorded over 150 prehistoric sites that are part of this unique community situated on the Tonto National Forest. 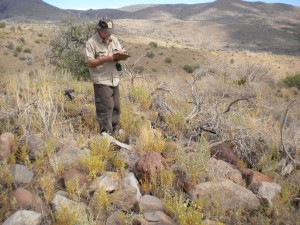 Permanent habitations were established only along the bottom of a narrow valley. Seasonal field houses were constructed on ridge tops and appeared to be in groups that likely represent land tenure units established to manage arable land on the ridge tops. Although the field houses were likely established to tend to agricultural fields, the dacite stone tool material also occurs in great quantities and may have somehow influenced the distribution of field houses. Moreover, the dacite stone tool material is not found as formal, finished tools, but rather as tested cobbles, bifacial cores, and tabular tools. 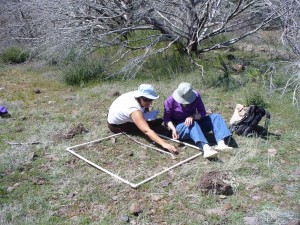 During the project, samples of dacite were systematically collected from the study area and submitted for EDXRF analysis to provide a baseline for characterizing the Stone Camp source. This analysis revealed that all of the samples came from a single geochemical source. After we learned the dacite had a unique chemical signature, we visited a select sample of large regional sites to see if the Stone Camp dacite was present. It was quickly apparent that the dacite was largely unrepresented outside of the Stone Camp community, with this dacite found only at a small number of sites near Perry Mesa. 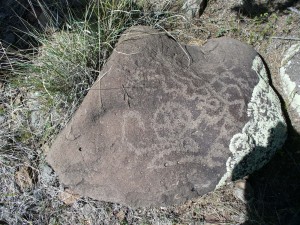 Further study of flaked stone material at sites in the region will expand archaeologists understanding of exchange and the relationships that may have been forged among the inhabitants of the area over 600 years ago. Through extensive research and careful fieldwork like this project, Logan Simpson’s cultural resources staff continues to unearth new discoveries throughout the West.